The Mystery Behind Mercedes-Benz Names Explained! 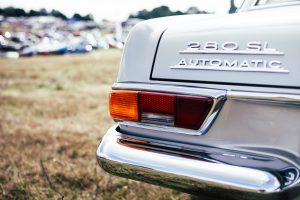 “What’s in a name? That which we call a rose by any other name would still smell as sweet” (Romeo and Juliet, Act 2, Scene 2). That’s all well and good for roses, Mr Shakespeare, but what about cars? And what about prestige cars? What about Mercedes-Benz?

This week, we are looking at what goes into a Mercedes-Benz name.

A jumble of letters and numbers, Mercedes-Benz’s model names may seem less intelligible and harder to remember than their competitors’. An average motorist, for example, may find it easier to remember a Nissan Navara than a Mercedes-Benz GL320. But like names of yore, Mercedes’ nomenclature are descriptive, telling you far more about the vehicle than their competitors’ modern, focus-group-driven names. In this entry, we will break down for you the components of a Mercedes-Benz name to help demystify the monikers of the oldest auto manufacturer.

A very good place to start

The first letter in a Mercedes-Benz name represents body. An A means a hatchback; B, a multipurpose vehicle; and C a coupe.

So know we know that the CLA in the CLA 220 d Sport means that the vehicle is a 4-door coupe. But what about the numbers in a Mercedes-Benz name?

They refer to the engine displacement. This is the volume of the pistons in a complete cycle, based on the maximum space a piston generates when furthest from the shaft. It is different to the capacity of the combustion chamber, in which the petrol is burnt. This is a way of measuring engine size, but not necessarily output or power. As it’s a volume measurement, engine displacement is measured in litres. Before 1994, Mercedes would then times this measurement by 100. Now, the number is only multiplied by 10.

This means that the CLA 220 d Sport is a 4-door coupe, as marked by the CLA, and has a 2.2L engine displacement.

Confusingly for car lovers, after the 1994 change, the numbers in a Mercedes’ name were forced to change. As the company made more cars, more qualifiers were required. No longer could we rely solely on engine displacement to distinguish models as a number of the E series would all hold 2.2L engines. So for the next twenty years, these numbers were not strictly related to the engine displacement. Rather than creating another key, a letter or number, to their names, the company decided to alter the already existing numerical value of their models. The numbers following the first letter of a Mercedes-Benz still correspond largely to the engine displacement, however more powerful cars or cars with greater performance were given higher numerical nominations than before.

The mid-sized E range is a fine example of this, with the E250 and E200 both having 1.8L engines. Using the old naming techniques, both should be E180, but because the E250 has greater engine performance, it’s given a higher numerical marking.

The last and the lower case

The story so far, then, sees us being able to identify the type of car and roughly its engine displacement and power. Based on its name, we can tell that a B200c is a multipurpose vehicle with around a 2.0L engine. Now we turn to the last of the code: the lower-case letter.

The lower-case letters of Mercedes-Benz names refer to the type of fuel the engine requires.

So now we know that the S500e is a sport scar with a 5.0L electric/ plug-in hybrid engine.

In 2014, Mercedes rebranded this last part of their name. Beforehand, an e would be referred to as either a “plug-in hybrid” or “electric”. A c was called a “Natural Gas Drive”. The company’s decision to turn to single lettering meant that they fill the name with more information, imprinting on the vehicle a series of descriptors. The only drive system not to be changed during the update was the all-wheel-drive, the 4MATIC.

So it turns out that there’s a lot in a name. That which we call an S300h by any other name wouldn’t smell as specific.

Volks Affair are experts in all things Mercedes-Benz. Book in today for a service, repair or quote.