Regular readers of the blog know how much we like names. We’ve written previously on how our other prestige German car brands, Mercedes-Benz, BMW, Volkswagen and Audi, have named their fleets. We’ve also written about the history of Skoda. We are yet, however, to write about how the Czech brand, now a part of the Volkswagen Automotive Group, name their vehicles. This week, that changes, as we present to you:

Let’s start at the beginning, with the name Skoda itself. You may remember us writing A Brief History of Skoda back in November. There, we talked about the origins of this affordable, reliable brand. We told you that Laurin and Klement, its founders, began repairing bicycles in the late 19th Century. Their business turned to truck manufacturing, before being bought by Skoda, an arms dealer, during the 1920s. Now owned by Volkswagen, it is one of the most reliable, exciting and stylish cars on the road, with models boasting a bevy of futuristic features.

But what does Skoda actually mean? Some would have you believe that in Czech, it means harm or damage. Other translations render it as “too bad!” (An old joke, before Volkswagen brought the brand into repute, would go: “You bought a Skoda? Too bad!” — an unfair joke: now, Skoda are ranked the most reliable cars on the road!) Really, these translations are just coincidences. In truth, the company simply shares its name with its founder, Emil Skoda, who bought Laurin and Klement’s business in 1925.

So that’s the company name, but what about the models?

There doesn’t seem to be much logical consistency to the naming of Skoda vehicles.  Other Skoda names, as you will see, are taken from Latin, Nepalese and English. Our mechanics are left scratching our heads as to why Skoda would name their cars after a North American bear, in a North American dialect. The company started in Czechoslovakia, are owned by a German company, and are manufactured in Europe.

Parent company, Volkswagen AG, have named another vehicle in Inuit: the VW ute, Amarok. The Amarok is a mythical Inuit wolf. There may be a tenuous thread linking Volkswagen’s love of wolves (their HQ is based in Wolfsburg, literally Castle of the Wolf) and the Kodiaq. Perhaps when researching lupine names, the company stumbled on to the Inuit myths, naming one VW model and two Skoda in Inuit? 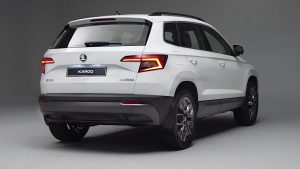 Karoq is also named in the Alutiiq tongue. It’s a portmanteau, a hybrid of “kaar”, meaning “car”, and “roq”, meaning arrow — Skoda’s badge.

More snowy monsters! In 2018, Skoda are replacing the Yeti with the Karoq. The Nepalese monster is also known as The Abominable Snowman. Snowy conditions are rare in Australia, but this doesn’t stop the Yeti from being a popular SUV downunder. Good for off-road treks, perhaps Skoda Australia should remarket this as the Yowie?

The fabulous Fabia is Skoda’s most popular car in Melbourne. In Latin, it means bean-grower. The Fabia were a prominent Roman family, possibly named after their bean-farming ancestors. Legend has it that the Fabia family captured wolves and other beasts by digging ditches, called fabii. They may also have been related to Romulus and Remus, famously suckled by wolves. The wolf motif continues!

The Octavia were another proud Roman family, heavily entwined with the Caesars and Emperors of Rome. No wolves are found in their history. Nor does their seem to be any connection between Skoda’s Octavia and the number 8, from which the name may also derive. Having said that, Skoda’s actual eighth model, well before the badge was owned by Volkswagen, made in 1949 to 1971, was called Octavia. It is unrelated to the current Octavia model.

Rapid and Superb are both fairly straightforward. No wolves, no Inuit. Just English superlatives.

There seems to be no underlying thread connecting Skoda’s names. Two are in English, two are named after Ancient Roman families. Two others are in an indigenous Inuit language. Another is named after the Nepalese Bigfoot. But whatever they call them, we know Skoda are high quality, good cars, and we love working on them. At Volks Affair, our Skoda mechanics are experts in Skoda service and repair. For all your Skoda repair queries, to book in a service or to arrange a quote, contact us today.