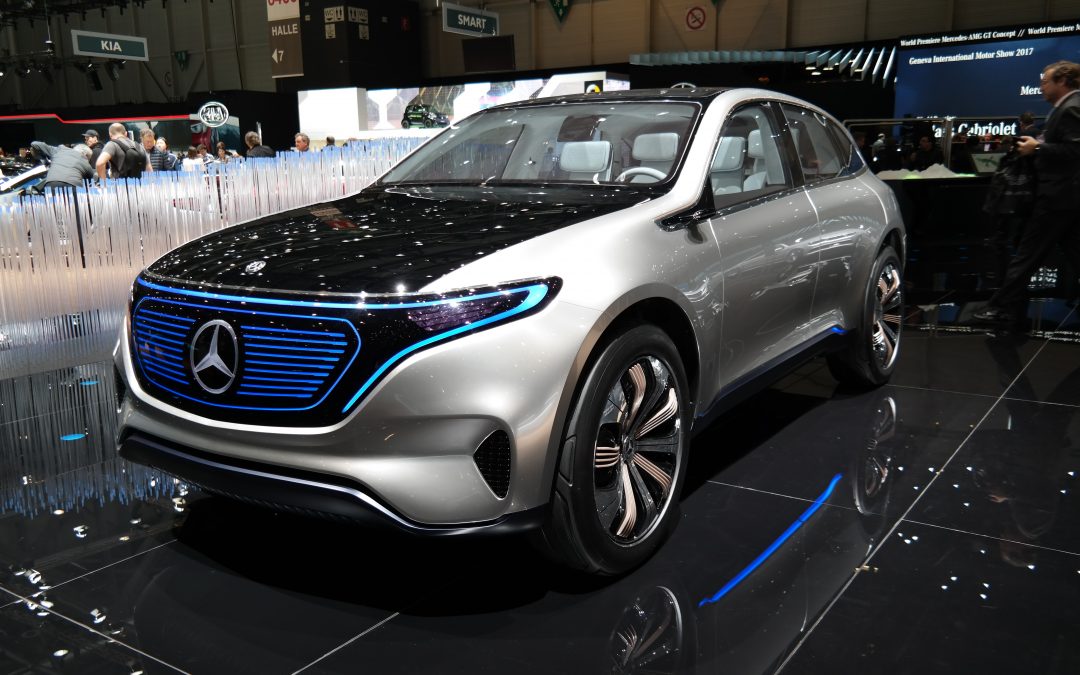 Over the past two months, we’ve told you about Audi’s electric model, BMW’s i-series and Volkswagen’s electric camper. To finish off our series on the electric cars of the very near future, this week we’re talking about Mercedes-Benz’s EQ C.

To begin at the beginning

Readers of the blog will know that we have a thing for names. With the invention of the EQ, we’ll have to go back and add to our post on Mercedes-Benz names! The EQ moniker will be given to Mercedes-Benz’s electric range. Its initials are a play on IQ, denoting the company’s focus on “Electric Intelligence”. And the C simply stands for “concept”.

If you’re like us and like to know the history of automotive nomenclature, read our posts on our other brands’ names here: BMW (Part One and Part Two); Volkswagen; and Audi.

But what is the EQ C?

The EQ C is Mercedes-Benz’s electric SUV, set for release in 2019. Like their other SUVs, the EQ C has 4MATIC technology — it is a 4-wheel drive. Two electric motors on both front and rear axles will give the electric SUV 300kW of power. Mercedes-Benz say that this will allow the zero-emissions car to go from 0 to 100kmph in under 5 seconds.

Like the electric BMW, Mercedes-Benz’s EQ has cameras instead of mirrors, illuminated displays instead of tail lights and more safety features than electrons. And like Volkswagen’s ID Buzz, set for release three years later, the EQ promises driver assist and autonomous driving capabilities.

There’s no point in having a futuristic car if it doesn’t look like it’s straight out of Blade Runner. Designers of the EQ C know this. Rose gold and lined with illuminated rods, the EQ C has the luxury typical of a Mercedes-Benz. But there’s something different about the EQ. Because it’s an electric car, there’s no need for the gear stick or any of the mechanical controls, making the whole thing very space-age.

The first thing you’ll notice upon entering the EQ C is the 24” high-definition widescreen display panel that starts from behind the steering wheel. It’s a display panel (or “instrument cluster”) that also controls the infotainment system.

The five-door SUV looks most like the GLC Coupe. If you thought the inside looked empty without the standard mechanical controls, you’ll think the outside is straight-up unfinished. For one, there are no door handles. Instead, a sensitive spot, when rubbed the right way, lets riders enter the sleek beast. First-time passengers may struggle to get in, but will become old hands in no time.

The handles were removed for aerodynamic reasons — the EQ promises to go from 0 to 100 in under 5 seconds. To make the ride that much smoother, the wiper blades have been hidden. They lie under the trailing edge of the bonnet, hidden like claws, waiting to swipe at any rain foolish enough to land on the $55,000 US machine.

Illuminated rods line the Mercedes-Benz EQ and, like the other electric cars we’ve written about, culminate in a light-up badge fronting the vehicle’s now purely aesthetic, graphic-enhanced grille.

Currently, Mercedes-Benz already have a plug-in hybrid vehicle: the E 350 e. On its battery, drivers can drive for 33km and up to 130km/h. Its electronic capabilities work alongside its 4-cylinder combustion engine. But the EQ is different — the EQ will be 100% emissions-free. The EQ and the E 350 e are the beginning of a ten-strong fleet of battery-powered all-electric or plug-in hybrid vehicles Mercedes-Benz want to have on the road by 2025.

The future of electric cars is well and truly around the corner. This series we have written on Audi, BMW, Volkswagen and Mercedes-Benz’ zero-emissions cars seems so fantastic. The models set for release within the next few years are the stuff of kids’ dreams — Volkswagen’s retractable steering wheels, Audi’s visual displays imprinted on the road, BMW’s road awareness and automatic braking, and Mercedes Benz’s wireless charging systems once seemed as unlikely as hoverboards and robot maids. It is such an exciting time for our industry, with digital and electronic technologies driving changes in every area of your automobile.