The Meaning Behind Volkswagen Names 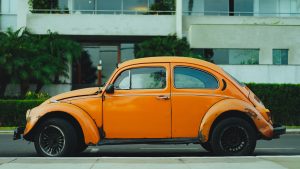 As part of our series in vehicle nomenclature, we present to you our entry on Volkswagen names. See our post on Mercedes-Benz names here, and on Audi names here.

Unlike Mercedes-Benz and Audi, Volkswagen names aren’t a series of letters and numbers. This week, then, we do not have a code to break down for you.

So let’s start at the very beginning…

“Volkswagen” is a compound word. To separate it out, it would be “volks’ wagen”. “Volks”, like our “folks” just means “people”. “Wagen”, from which we get “wagon”, means “car”. So “Volkswagen” literally means “people’s car”. Volkswagen, then, is the car for the people.

In the 1930s, when Volkswagen started, most German cars were luxury models – think Audi and Mercedes-Benz. The Labour Front wanted a car for the worker and the working family. Enter the Beetle.

Perhaps the most iconic VW, the Beetle is so named because of its shape.  Technically called the V1, the VW Beetle is better known by its insect alias the world over, from the English “Bug” and the German “Käfer” to “Coccinelle” (ladybug) in France. The Mexicans know the VW Beetle as a Pulguita, meaning “little flea”.

Some parts of the world, like Greece, Iraq, Thailand and Malaysia, say the Bug isn’t a bug at all, but a turtle.

In Swahili speaking countries, the Middle East, Peru and Indonesia, the Bug is a frog!

VW’s Golf series has nothing to do with the Scottish game – despite both benefitting from a good driver! “Golf” is an Anglicisation of “gulf”, short for “gulf stream”, the warm Atlantic wind that starts from Mexico and flows to Europe.

The Caddy, secondary to The Golf, is named in honour of this confusion, a caddy being a golfer’s sidekick. Responsible for carrying around the golfer’s clubs, the caddy lends its name well to a panel van.

Like The Golf, most Volkswagen names are based on winds.

The Jetta, for example, is a type of wind that occurs between the tropics.

Scirocco, similarly, is a clash of hot and cold air streams in the North African desert that pushes wind and sand up to the Mediterranean. It is also a sedan made by VW in the 1970s and 1980s and from 2008.

Wind suggests speed, smoothness and silence. The winds chosen for VW names are all subtropical, Mediterranean or desert-based. Perhaps this is to evoke a sense of adventure, warmth and liveliness.

This warm Mediterranean feel continues west into Persia, whence the Sharan takes its name. The luxury people-mover fits seven adults and is the “carrier of kings”.
The Touareg, similarly, is named after a nomadic Sarahan tribe, the Tuareg.  The extra o in Touareg, we imagine, comes from the blending of the tribe’s name with the word “tour”, as the Touareg, like the Touran (tour + Sharan), is a hybrid SUV suitable for long trips.

The Tiguan is a mystical chimera. A portmanteau of “tiger” and “iguana”, the Tiguan is a hybrid animal and a hybrid vehicle. A compact SUV, the Tiguan has a tiger in the tank and an iguana’s ability to adapt to its environment.

Whether they be winds, tribes, kings or beasts, all the VW names so far have been connected to warm climates.

In 2008, VW announced their first utility vehicle, the Amarok. According to legend, the Amarok is a giant, Inuit wolf. Alone, the Amarok preys on other solitary nocturnal hunters. The legend is a warning against going out alone in the snow at night.

So why name a ute after a bogeyman?

The Amarok is also a symbol of strength. The more it eats, the stronger it gets. For its first foray into the utility vehicle market, Volkswagen set aside its typical naming systems in favour of something robust, strong and beastly. It chose the Amarok.

The wolf motif isn’t new to Volkswagen: the company began in Wolfsburg, Germany, and had the city’s crest as the emblem on its steering wheel up until the 1980s. It took the people’s car 70 years before they made a work vehicle, but when they did, they remembered their origins. They are from the wolves’ town and they are the car for the everyman.

So there you have it! Volkswagen names its vehicles after warm winds, Persian kings, nomadic tribes and weird, mythical animals. Its crossover SUV range has hybridised names, like the Tiguan, Touran or the Touareg. The humble bug is known all over the world as something else, like a lady beetle, frog or even a turtle!

For all your Volkswagen information and advice, contact Volks Affair. Book in for a service, repair or quote today!